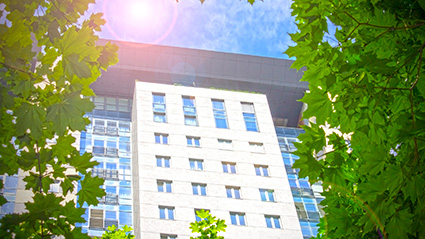 In August, a group of distinguished climate scientists from the United Kingdom released a report indicating that over 28 trillion tons of ice had melted and disappeared from the Earth’s surface since 1994.  This is important because it reinforced predictions from a study published earlier this year estimating that – at this level of melting – sea levels will rise 3 feet by the end of this century with serious consequences for the majority of our world’s population.    This report, coupled with the devastating wildfires burning across the West Coast, is just the latest reminder that while climate change may have been overshadowed by the global pandemic, it continues to pose a real, immediate and existential threat to everyone on the planet.

According to the Global Alliance for Buildings and Construction, over twenty percent of the world’s greenhouse gas emissions are produced by the buildings in which we live and work.  So, it stands to reason that the burden of responsibility for addressing climate change will fall heavy on the shoulders of the real estate industry. Over the last decade, the industry has taken many positive steps in this area by adopting green building standards, incorporating energy and water conservation practices and accelerating the adoption of environmental and social impact policies that incent property owners to think not only about the financial returns of their investments but also their impact on the world around us.

In the multifamily sector, these actions have been accelerated thanks to the efforts of our Government Sponsored Enterprises (GSEs) and the Federal Housing Administration (FHA) via the introduction of green mortgage products that incentivize the owners of rental housing to make energy and water savings improvements at their properties.  In the decade since Fannie Mae launched the industry’s first multifamily green initiative, the GSEs and FHA have provided over $150 billion in multifamily green loans, conserving energy, water, and reducing carbon emissions in properties across the country.  Once thought of as a niche “specialty” product, green financing comprised approximately 25% of the GSEs total multifamily production in 2019.

Earlier this year, Fannie Mae continued to stake out its leadership role by announcing two important enhancements to their existing suite of green financing programs.

Ten years ago, the idea that 25% of the GSE’s annual multifamily loan volume would meet green financing standards or that Fannie Mae would be the largest issuer of green bonds in the world would have been considered impossible.   We have truly come a long way.   But the time for celebrating that progress is over.  We must move beyond the significant but incremental improvements of the past decade and embrace a new set of ambitious goals to achieve the exponential change that is needed.

Here are two that we should commit to achieving by the end of the next decade:

Simply put, we cannot afford to make green financing just another product offering in the market.   Green financing must become the status quo.

To be sure, these are ambitious goals and there are no clear and simple pathways to success.   Some would even say that they are impossible to meet.  But, those words have been said before.  Our history is filled with examples of people who rolled up their sleeves and worked together to achieve impossible things.  The first step is to make the commitment to try.